Pigs are known to be looked down upon. Thanks to their fondness for mud and tendency to eat nearly anything, the otherwise intelligent animal usually gets a bad reputation. But while most people may snub their nose at the idea of even touching a pig, scientists are looking to make use of their organs in human transplant surgeries. According to a recent study, researchers may be closer than ever to using pig organs for human transplant.

Many are unaware of just how biologically similar humans and pigs are. For this reason, pigs are often used for everything from practicing surgery to developing the best way to find cadavers. According to a recent study presented on last week at a meeting of the National Academy of Sciences in Wa 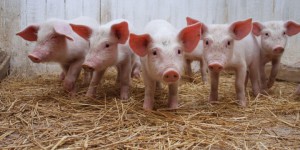 shington, D.C., our relationship with pigs may get a lot more personal. Although pigs and humans are similar biologically, doctors must address certain obstacles before they can even think about using them for organs transplants.

The first and arguably most important of these obstacles involves the possible transfer of pig viruses to humans. However, this week, a team of researchers led by Dr. George Church, a geneticist at Harvard Medical School in Boston, announced their success in killing 62 viruses from pig embryos. The feat was accomplished using CRISPR/Cas9 gene-editing technology, and has eliminated the fear that these viruses could cause disease in human transplant recipients, Nature reported.

Organ rejection is a serious problem with any transplant operation. In the case of pig-to-human transplants, this problem is even more apparent. According to the recent study, Church and his team were also able to overcome this problem by using CRISPR technology to successfully modify more than 20 genes in pig embryos known to trigger a human immune response or cause blood clotting. The feats are a major step forward to creating a sustainable organ bank, and could one day be used on pigs specifically intended to be organ donors. “This is something I’ve been wanting to do for almost a decade,” Church said, according to Science.

Currently, organ donations are the only source for those needing a transplant. Recent innovations, such as making use of HIV positive transplants, have helped to get more body parts to those who really need the transplant. Research into using stem cells to grow organs has potential, but the demand is incessant. According to the Department of Health & Human Services, in 2014, an average of 22 people died each day waiting for transplants that couldn’t take place only due to the fact that there weren’t enough donors.

Now that we know how to fine-tune the pig DNA, it’s time to make sure it’s done correctly. The team’s next tasks involve ensuring that the deactivation of the pig viruses do not compromise the welfare of the animals. At this point it’s unclear exactly what role the viruses have in the pigs’ biology, and what removing them may do to the animals’ fitness. However, Physics.org reported that Church plans on implanting the gene-edited pig into the mothers sooner rather than later, so it won’t be too long before we are able to see the living product of the genetic feat.