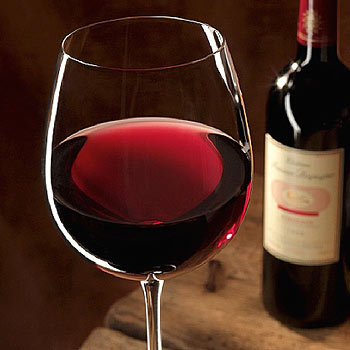 Cancer may soon recruit help from a compound found in a normal bottle of red wine. Researchers from Oregon State University’s College of Pharmacy are exploring the nascent benefits of resveratrol and quercetin—two naturally occurring antioxidant compounds found in grapes, green tea, berries, dark chocolate, and red wine. The study, published in the Journal of Controlled Release, reveals the potential polyphenols may have as a foundational ingredient in advanced cancer treatments thanks to their effects on an existing chemotherapeutic cancer drug, adriamycin.

“This has great potential to improve chemotherapeutic cancer treatment,” said the study’s lead researcher Adam Alani, a professor at Oregon State University, in a press release. “The co-administration of high levels of resveratrol and quercetin, in both in vitro and in vivo studies, shows that it significantly reduces the cardiac toxicity of Adriamycin. These compounds have a synergistic effect that enhances the efficacy of the cancer drug, by sensitizing the cancer cells to the effects of the drug.”

Adriamycin has proven before to be an effective chemotherapy treatment for lymphomas, breast, ovarian, and other cancers. However, it has been limited in its use because it often causes cardiotoxicity, a dangerous side effect in which the heart weakens, and therefore less efficient at pumping blood around the body. The polyphenols resveratrol and quercetin may be able to eliminate this problem. A wealth of previous studies have tested their potential to be used in medicine, including some from Alani’s team, which found they could reduce cardiotoxicity in both animal and human trials.

The key innovation in advancing this cancer treatment is the system researchers developed to administer resveratrol and quercetin. By using copolymers, they were able to make these compounds water soluble and ultimately injectable into the bloodstream. By administering the polyphenols intravenously, patients would be able to achieve higher levels than they could have achieved through ingesting from diet or oral.

“There are several advantages with this system,” Alani said. “We can finally reach clinical levels of these polyphenols in the body. We can load both the compounds at one time to help control the cardiotoxicity of the cancer drug, and we can help the polyphenols accumulate in cancer cells where they have their own anti-cancer properties.”

Adriamycin may be used in conjunction with the resveratrol-quercetin injection, allowing them to use the chemotherapy drug without causing any damage to the heart. In addition, because polyphenols are antioxidants they’ll bring with them an extra anti-cancer boost of their own.

In 2013, a 12-year study demonstrated how resveratrol was able to slow the growth of cancer cells. More recently, quercetin has been shown to improve heart function, endurance, and extend the lifespan of mice. Together, they could serve as a treasured ingredient in future cancer therapies.

“This is like hitting three birds with one stone,” Alani said. “It has great potential.”